What is the difference between high tea and afternoon tea?

For the British, tea is not just a hot beverage; it’s a meal. The most delightful meal of the day, in fact, but the word embraces a wide variety of meals and occasions. It can be served at any time between 3:30 and 6 in the afternoon, around a kitchen table or in a drawing room with elegant chairs. Whether afternoon tea, high tea or some more exotic variant, confusion often arises as to exactly what each involves. The only constant is the tea (to drink).

In the second half of the 20th century, tea, as a meal, was declined. This was partly because cakes and other teatime goodies received bad press health wise, and partly because the lives of Britons became more hurried, often to the point where we no longer even stopped for a cup of tea, let alone a proper meal. Recently, this trend has reversed. We are more interested in baking, some healthier ingredients have moved to the fore and the importance of family meals has been widely recognized.

Tea as a drink was fashionable in Britain by the late 17th century, but it did not refer to a meal until 1840 when Anna, the duchess of Bedford, felt a “sinking feeling” and ordered cake to be served with a cup of tea. At this time, a long gap without food occurred between a light lunch and a late dinner. Anna was a close friend of Queen Victoria and influential in aristocratic circles, so tea and cake rapidly became very popular. The queen herself enjoyed a meal at teatime (Victoria sponge, a pound cake sliced in half and filled with jam, cream or both, is named in her honor). It began as a meal of the leisured classes, those with the time and money to be able to sit and relax during the afternoon. It was often called “low” tea, as the participants sat on comfortable low chairs in elegant drawing rooms. With time, the meal developed and sandwiches were included, typically finely sliced cucumber between paper-thin slices of bread. A wide range of dainty cakes and pastries followed. Cream teas with scones, clotted cream and jam originated in Devon and Cornwall, where clotted cream is chiefly made, but are now available countrywide.

The 19th century Industrial Revolution in Britain brought about the rise of “high” tea, spurred by urbanization. Builders and factory workers often worked considerable distances from their homes and returned hungry in the early evening. They fell into the habit of taking a meal at about 6 p.m. sitting around a table, usually in the kitchen. This was a much more substantial affair than the low or afternoon tea of the aristocracy, and it became known in contrast as a high tea. Everything was placed on the table at once, including pies and cold meats, tarts and salads, jam, honey, toasted tea cakes and hearty fruitcakes. The richer the household, the more there typically was. One of the best types of high tea is in a farmhouse kitchen, with homemade bread, newly churned butter, and a feast of fresh and simple food.

An article in the Daily Telegraph of 1893 describes it perfectly: “A well-understood ‘high tea’ should have cold roast beef at the top of the table, a cold Yorkshire pie at the bottom, a mighty ham in the middle. The side dishes will comprise soused mackerel, pickled salmon (in due season), sausages and potatoes etc., etc. Rivers of tea, coffee and ale, with dry and buttered toast, sally-luns, scones, muffins and crumpets, jams and marmalade.” A light supper, such as a sandwich, followed later in the evening.

High tea is often associated with northern areas of England, where it is called “meat tea,” and Scotland, where it is simply called “tea.” “Tea” meant the same thing in Australia and New Zealand. This could cause misunderstandings when guests were invited to (afternoon) tea but turned up several hours late, expecting a more substantial meal. 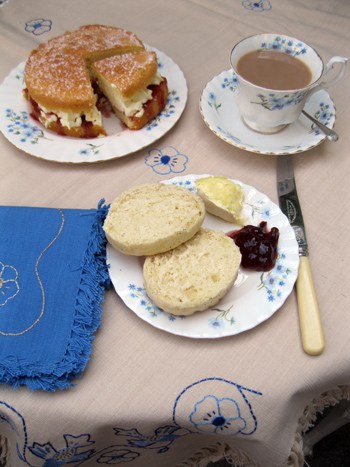 Strictly speaking, afternoon tea fills the gap between lunch and dinner, but it’s rarely vital to one’s survival. High tea, on the other hand, is a necessary meal, eaten when typically artisan workers return. Nowadays the divisions are blurred, with food such as scones and sponge cakes appearing at both meals. The very adaptability of tea has caused this confusion, but whatever we call the meal, it is one that we British believe we would be much poorer without.